Thursday, March 28, 2002 found our family at IHOP in Charlotte to eat with our dear friends Jerel and Susan Law and their kids.  An early morning breakfast was the only time that worked for everyone’s busy schedules. We were hard to miss; two tables pushed together, adults, teenagers, a preteen, toddler and infant and all the trappings that go with each.

It was our first time to meet 4-month old Christopher, and Wesley, Ryan and Mandy had helped pick out gifts for the new baby and big sister Bailey. Among them was an Octopus Musical baby toy. 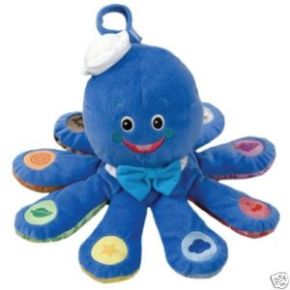 Wesley and Ryan had especially wanted to get this toy.  With their involvement in band and orchestra – Wesley played drums and acoustic bass and Ryan played French horn – they were anxious to try their hand on the eight legs of the octopus.  Squeezing the end of the leg produced a tone, and each leg sounded a different note.  We were all amused as they picked out tunes and rhythms, “playing” the octopus.

After a while of “Wesley, play ‘Twinkle, Twinkle Little Star'” and “Ryan, can you figure out ‘Mary Had a Little Lamb’?” we adults returned to conversations of church, family and active lives.  But not Ryan…

Ryan continued to sit beside Christopher’s baby carrier, bent over the musical octopus in deep concentration, finding melodies that ranged from nursery rhymes to John Phillip Sousa to Bach. He became quite adept at “playing” the octopus, which delighted Christopher and Bailey.

Lost in our own conversation and accustomed to lots of noise, with either teens or toddlers in the house, it didn’t occur to us that Ryan’s music might be bothersome to those around us.

Not, that is, until a man sitting alone and reading his newspaper several tables away spoke up and said, “Stop making all that noise!” Well, that certainly broke the joyful mood of our visit. We asked Ryan to put the octopus away. I was embarrassed but also a bit perturbed that he would speak harshly to children who were so obviously enjoying themselves. And they really weren’t being too loud.

We wrapped up our visit and prepared to leave in time for Richard to get to the airport to begin his 4-day trip. Hugs and goodbyes were had all around. Richard hugged and kissed each of our children, just as he always did when he left for work. There was no way to know that it was the last time he would hug and kiss Ryan.

I have such happy memories of that breakfast. I wonder if that man would have been so grouchy if he had known that my son only had 36 hours to live. As for me, I would give most anything to hear him play that octopus again.

12 thoughts on “IHOP and the Octopus”