In cleaning out my almost 97-year-old mother-in-law’s apartment at the retirement home, we rediscovered lots of treasures from the past, from the 1800s and even 1700s.  Art, letters, documents, linens, silhouettes, old money, glass, pottery, furniture, dolls, photographs, pocket watches, daguerreotypes, and on and on. What to do with all this history? Family members helped sort and kindly took what delighted them. The consensus was to leave most of the North Carolina and Tennessee pieces in the Eastern part of the country where they belong.  We tried to find a perfect home for what remained, be it archives, museum, antique dealer, church, Goodwill, or our own home.

Some items were clearly marked with important information about origin, date, and significance. Most were not. We relied a great deal on family lore. Sadly, the family members who knew the history or could, at least, make up a credible story, are long gone. My mother-in-law’s memory is mostly gone, as well.

But there is a tale about some silver, three candelabra, and a special embroidery piece that I would like to share:

In the family collection were two silver goblets, a waste bowl, and a large pitcher. All were black from age and neglect. My husband had always heard that this silver was Branner Silver from The Oaks, a large Victorian home in east Tennessee, now a museum called Glenmore Mansion. The Oaks was built in 1868-69, soon after the Civil War, by John Roper Branner, my husband’s third great-grandfather. He was President of the East Tennessee and Georgia Railroad and apparently had the means to build his large dream home, even after the devastation of the war. Tragically, John Roper died before the house was totally completed and his widow, Deborah, expired several years later. There are stories of the couple’s spirits roaming the upper floors of the mansion and dancing in the ballroom. 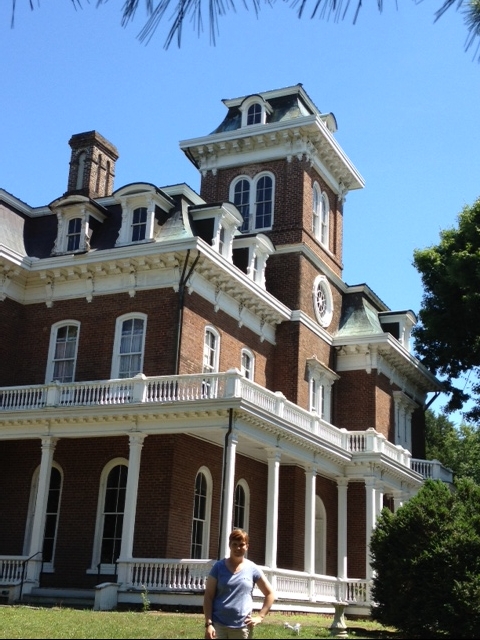 Back to my tale: My husband had heard from Great Aunt Alice that the silver service was original to the Branner House. We decided to return it. Thus began my attempts with hard elbow grease to remove the black tarnish. After hours and days of polishing, clues began to emerge. The silver mark on the bottom of the pitcher read, Meriden Britannia, a Connecticut company that began producing elegant silver holloware in the mid 1880s. The date, at least, was a fit. As each of the pieces was restored to original luster, another happy surprise was suddenly revealed. Every piece had a beautifully engraved “B” on its side. “B” for Branner! I was all smiles and feeling a tad like Nancy Drew. Then, I remembered an old silver tray in our dining room sideboard. As I polished the tray, what began to glisten from the soot of ages but a large shining “B” in the center. The set was complete!

Some years back, my mother-in-law gave us three candelabra. They were quite elaborately adorned with gold filigree and crystal prisms. Rumor had it that the two end candelabra and larger centerpiece came from the mantel in the 2nd floor ballroom of The Oaks, so back to Tennessee they went. It was with great delight that we discovered our candelabras’ matching sisters on the mantel of the main floor salon!

In a frame at the back of a closet, we found a large embroidered bouquet of flowers. Someone spent a lot of time on this colorful creation. Miraculously, taped on the back was a card with the following notation, “Embroidered by Deborah Chisholm Massingill while in school at Salem Female Academy.” Deborah was the wife of John Roper Branner!

The aging volunteers who open The Oaks/Glenmore to visitors on certain weekends in warmer weather were delighted to welcome our family. They said it was rather amazing that another Branner descendent from Florida had visited the week before and returned a gold watch. Both visits merited photographs and a spread in the local newspaper. What a treat for us to step back in time and try to imagine what life may have been like on that beautiful hillside in the 1800s and to read the history on the tombstones of now familiar ancestors. We were happy to play a small part in this ongoing and engaging family documentary.