Dottye brought a few of her collection of 100+ hats to our recent writing retreat, and we enjoyed trying on hats and writing about them. As it usually does, reflective writing gave us a chance to explore pieces of ourselves and our lives.

Now, more than 12 years after we first met to write about our grief and about our children, we still do that, but we also may write about other aspects of our lives. Our fourteen children are still part of us, no matter what writing prompts we respond to.

The hat I chose is pictured below. Something about wearing a hat can let us all play different roles or remember times in our lives.

The hat: a tall, black felt cloche with feathers shaped around the top of the hat

starting from a point at the center of the top and fitted vertically around the bell-shaped part, reaching to the grosgrain band at the top of the brim. The brim is covered with a black knit fabric. A fine, almost invisible black net covers the feathers, gently holding them in place.

What is it about a jaunty hat, an accessory that could be seen as utilitarian  (to hide unruly hair, to warm a balding pate, to hold in body heat, if indeed heat does escape from the top of one’s head) that makes such a statement? This hat of Dottye’s is much more than utilitarian: It’s an accessory that says I am strutting (like a peacock or pheasant, maybe a penguin?), but I’m strutting with a subdued elegance.

Oh, this hat would not be one to hide in a closet. It might be one to wear to an opening of an aviary or zoo, an after-the-hunt party, or I think I might just like to wear it to hike a bit of the Pacific Coast Trail (if I were Cheryl Strayed). Perhaps a friends group for parks would appreciate the species of birds represented by the feathers. I know my grandchildren would love this hat and would think up marvelous uses for it.

Inside the band, the label says, “Angel design.” Who is Angel? Or who is the angel?

It’s a fine-feathered creation meant for strutting. My daughter, who might just as well 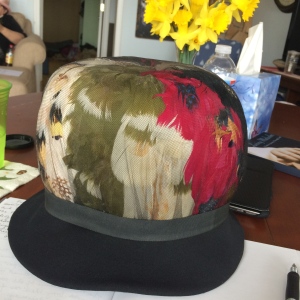 have chosen a painters cap or a ball cap with a ponytail fitted through the back of the cap or a white straw Easter bonnet or any number of unusual headgear—now found in the dress up bin for grandchildren—she would have worn this hat! Maybe that’s why I picked it, sensing how she might personalize the wearing experience.

These feathers remind me of a couple of  encounters with birds:

(1) The peacock on Susan’s chimney and its alarming and alarmed scream when we drove up her long driveway after dark, the tires crunching gravel as we drove slowly as if tiptoeing on broken glass, hoping to avoid detection. The ill-tempered peacock perched on the 1805 chimney with the crack in it from the Charleston earthquake in the late 1800s let everyone know we were coming. I don’t know which surprised me more: the peacock who never failed to alert Susan’s parents or that an earthquake in a city four and a half hours away could put a crack in a chimney in Pfafftown.

(2)The rooster that belonged to Mrs. E., my centenarian neighbor. It would strut down the road walking on the painted yellow line in the center of the street, its head and neck thrust first and the rounded feathered body following. The rooster, mostly cinnamon in color, walked almost daily on that yellow line from Mrs. E.’s house to our street, veering to the left at the intersection of our small street and the larger road, making another sharp left into our driveway, then still strutting, continued to our sidewalk, stopping abruptly at the bottom of the brick stairs that lead to the porch. As if stopped in marching formation, the rooster then made its cockadoodledoo call. It was as if he called for some kindred feathered friend or subordinate, and always in late morning or the middle of the day. He was no early riser.

Dottye’s hat sent me wandering and floating through all kinds of feathered memories.

2 thoughts on “Hats for us”