This writing is a response to (with inspiration from) Denise Levertov’s poem, “Animal Spirits.” Here’s a link to it: http://writersalmanac.publicradio.org/index.php?date=2013/05/14

When I was six, I too wanted to soar in the swing up and up, pumping and urging myself forward. I dreamed I could fly but did not often let go to try. Instead I sat on the hard bench rescued from church that nudged against the wall on Grandma’s porch and read and dreamed and watched for cars, red clouds of dust billowing behind them as they sped down the dirt road. Or I squatted under the oak trees and played in the world of fairies and Borrowers, my imaginary small folks who peopled the root-divided rooms under the oaks.

When I was eight, the road that passed beside my grandmother’s house and mine was paved. No one was allowed to drive on the road for a whole day after the paving, so the school bus dropped me off a mile away on Concord Church Rd. just where Styers Ferry Rd. began, and I walked home with my cousins and my brother, enjoying the crunch of soft tar and gravel on the edge of the new black top and feeling stuck to the earth each time I picked up my sticky feet. One mile of trees and a long meander later, my shoes gummy from the tar, I finally saw the oak trees that marked my grandmother’s yard. I had to leave the shoes at the door. For a long time after that walk, I felt even more stuck to the earth when it took extra effort to lift my feet.

After the road was paved, the telephone company put up tall poles and strung line from one to the other and somehow, as if magic, enabled us to use the black box with the circular dial to talk to others and to listen to our neighbors on the party line. My first telephone call was to a second grade friend, Brenda, who lived in the town of Lewisville and was an accomplished user of the telephone, having had hers for a whole year before. Whitehall 5572 was our telephone number, and that number first assigned to our household, remained the personal number for my mother for more than 55 years.

I imagine that the person who has the number now might wonder occasionally about the first users of that number: how the ringing in the middle of the night brought tears and sorrow when my 21-year-old cousin died along with her unborn child, how the teenaged girl fell asleep with the phone to her ear, listening for the goodnight of a boyfriend while the radio crackled with the music from the faraway Chicago station in the deep of night, how the long distance call from another state brought smiles—see how much sooner we learn of the birth of a new cousin with the telephone?—and how the grandmother on the party line listened in to all the neighbors’ calls, dipping snuff and smiling to herself, wanting to join in the conversation but knowing she must keep quiet if she wanted to hear secrets.

I wish I had flown from the swing more often to feel the soar of freedom, but I probably would have landed in the rose bush, prickly thorns scratching my legs and cheeks. My swing was a metal one with clinky chains on a swing set beside our house, unanchored, so that when my brother and I would swing high and push hard, we could make the legs of its letter A sides rock out of the ground, back and forth. We scrambled to eject ourselves and run out of range as it began to tip toward the ground. My favorite swing, the one Uncle Boyd attached to the oak tree for his daughter Pat, drew me as if magnetic to its smooth wooden seat and its sturdy ropes. I learned to pump my legs on that swing, and it took me high enough to touch the sky, with no sense that the tree would be tipping over. 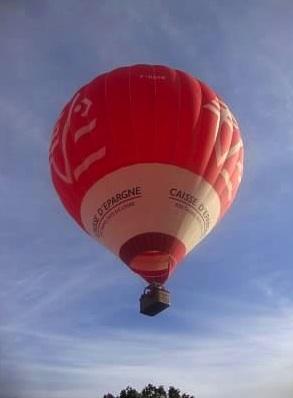 In France last fall, when several of the members of our writing group were aloft in a hot air balloon, a montgolfier, I thought of those swings and touching the sky when I was young. I even had a fleeting thought about tipping when we were about to land and had to sit in the bottom of the basket and grasp the rope handholds on the side. The balloon ride was a gentler ride but oh, the swoosh of air taking us up and the feeling of peace as we floated far above the grounding gravity, almost high enough to touch the clouds and high enough to see the swaths of rainbow around the sun.

Sometimes a little swinging or floating in a soft breeze can take us places we might miss otherwise—whether we eject ourselves or not. And when I am not so grounded, I can almost feel the freedom I imagine my daughter has now.

For more about the balloon ride, see Farther Along Writers Aloft in Champtoce sur Loire.