Not everyone in our writing group knows this story, so I am sharing it partly for our group. Every time I think of it, I smile.

Last September, twelve of the bereaved mothers from a writing group that has continued for almost eleven years now, traveled to France to spend a week in a chateau in the Loire valley. Some of us spent another several days in Paris after our writing week at the chateau. We have so many stories to share from that time. Here’s one:

in a crushing mass of people nudging ever so slowly forward to get a glimpse of the tiniest little Mona Lisa. When I finally managed to hold my phone still for a photo—everyone has to have one—someone bumped my arm and my photo is tilted to one side and a little blurred too. Oh well.

After we were released from the Mona Lisa crowd, we wandered along a corridor and stopped at a sculpture titled “Jeune Fille,” a young girl. For a moment, I thought of our both standing in front of this sculpture, both of us having lost our daughters, both longing for their presence. We have shared so many memories, so many stories of our children that although we did not meet them, we feel we know them. Elizabeth and Rebecca, our daughters, both died in the same year, both teenagers, both suddenly.

Then I felt a drip. In the Louvre?! I looked down to see a small puddle of water, a flaque d’eau—only I was not nearly quick enough on the translation to call forth the phrase at that moment. Peggy and I both looked down at the puddle then up at the ceiling, the very high ceiling. We could see a wee little dark spot where water was seeping in and dripping down—right beside Jeune Fille. We both gasped at the same time. The young girl in the Louvre was threatened by the rain seeping in through the roof. WE must save her!

Now I thought we must be in an old Peter Sellers movie as Peggy rushed toward the center of the crowd saying, “We have to find someone to tell about the puddle.” Neither of us had a great command of the French language. (I’m so sorry, Mlle. Snow, that I did not remember all you tried to teach me in high school French class.)

When we saw a person with a name tag clipped to his jacket who appeared to be an attendant, Peggy touched his sleeve (or maybe she tugged on it) and tried to tell him about the leaky ceiling. He recoiled as if we were both trying to harm him. Peggy told him excitedly about the puddle.

“Je ne comprends pas,” he said to Peggy’s frantic gestures toward the sculpture. We made huge arm motions to beckon him to the sculpture. Finally he followed us back to Jeune Fille and he gasped too as he looked down at the puddle then up at the drips from the ceiling. Then he offered his most gracious “mercis” to us.

That’s how Peggy saved the Louvre on a rainy day in September. 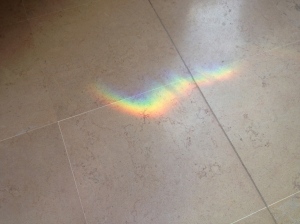 And when we came downstairs from that gallery, there on the floor of the Louvre was this swath of rainbow light.

And there are so many more stories. Stay tuned.

7 thoughts on “Peggy Saves the Louvre (and Jeune Fille)!”