I just finished mopping the kitchen three very thorough times. I had to scrub with paper towels first, then adding lemon-scented Pine Sol to the bucket, I took my sweet time. I was mopping up the last of Sophie. Of her illness, actually. Sophie was our third Shetland sheepdog—our one-blue-eyed, one-brown-eyed, bi-blue merle (grey and black on white) speckled “Clown Dog.”

Sophie, yet un-named, claimed us in June of 2002, resting her 10-week old chin on my foot at the breeder’s home in Greensboro. Blaine and I were on our way to the beach, so we gave the man a deposit.

“We’ll stop by to get her on our way home from the beach in a week,” I informed the breeder.

Earlier in the interview process when he asked us if we had a fenced yard, I told him we did. I didn’t divulge that it was an underground dog fence, the kind that after training, keeps your pet in your yard, but does not keep other animals out. I hadn’t really lied, but I suppose I hadn’t been completely truthful. Besides, we really needed this dog.

Millie, who we’d left at home to guard the lonely fort was our 3-year-old sable and white Sheltie. She was constantly pushing Wes’s and Andy’s bedroom doors open, looking for her two teenaged pesky “brothers.” She had begun looking for them within days of their deaths; it had been almost three months now. So Blaine and I decided she needed another dog. At least we thought she did; we certainly did. Fur therapy, I suppose.

The breeder replied to my comment, “Oh no, I’ll bring her to you. I like to see the homes where my puppies go to live.”

I was caught in my little white lie. I remember looking at Blaine and his eyes gave me that “you have got to ‘fess up” look. We were walking down the man’s driveway, practically saying goodbye to him, as he asked for the address of our home in Winston-Salem. My heart pounding in my chest, I was even trying to think of a friend’s home that was truly fenced in so that I could give him their address, but the devil on my shoulder wouldn’t produce one quickly enough. Or perhaps the angel on my shoulder was flapping her wings in my ear so loudly that I couldn’t hear the address!

The check had our address on it of course. I suppose he wasn’t remembering that detail when he asked, and I certainly was an idiot to think that I could give him another address. Blaine actually pointed that out to me in a blatant whisper. (I am laughing at myself as I write this.)

I turned to the breeder and told him the truth.

“Okay,” I nervously responded, “We have an invisible fence, not a true enclosed one.”

His reply surprised both of us. “That’s fine.”

Our conversation in the car after driving away was probably hilarious. I’m sure Blaine shamed me (Mr. Eagle Scout), and we had a good laugh as well.

Sophie would have celebrated 13 years on April 28. In human years she was around 90 years old. She lived longer than our other two shelties, outlasting Shadow by 7 years and Millie by 8. But this morning at 9:33 we said goodbye. The fur therapy she provided was crucial to the last 13 years of our on-going healing.

As much as we needed Sophie in those early years, Millie thought otherwise. We soon learned that Millie was a very strong alpha. Putting this puppy in her place when she had had enough revelry, Millie would give a quick snarl and turn away with a tuft of Sophie’s fur in her mouth. Sophie soon learned when playtime was over.

Millie was also the bathroom monitor, giving whatever signal dogs give to let Sophie know when it was her turn to descend the steps from the deck to relieve herself every morning. Thankfully, this was only a morning bathroom rule for Sophie. She obeyed willingly, just as she knew she couldn’t have her breakfast or supper until Millie had been fed. That was Millie’s rule, not ours. She would growl a low, bossy command before she began eating, thus telling Sophie it wasn’t her turn yet.

But Millie was also Sophie’s emergency alert service. As annoying as Sophie was to Millie, Millie was the responsible, older fur child.

Early in Sophie’s dog fence training she bolted out of the back yard, wincing as she and the shock collar crossed the invisible fence. I called to her but she kept running. Millie took off after her, without a collar because we only had one—the one on Sophie. She had long been allowed outside without the collar and only chased squirrels in the next door neighbor’s yard. I quickly grabbed both dogs’ leashes and ran off the deck and through the back yard, which also backed up to more houses and a street. Yelling both their names at full volume, and fearful of either or both of them being hit by a car, I caught up just as Millie was gently herding Sophie back towards our yard, barking as if to say, “Idiot! Don’t you know you’re supposed to stay in our back yard?! You got what you deserved, you dumb dog.” Sophie never ran off after that. Millie probably reminded her of it many times. Knowing Millie, she most likely told Sophie that she wasn’t allowed to chase squirrels.

Sophie was a gnawer in her first several months, and though we crate-trained her, she still found time to chewand eat several of the raised areas on our kitchen chair spindles. The chairs are made of ash, which is what baseball bats are made from. That’s a very hard wood! She was a very sick puppy, and Millie knew she needed help in the middle of the night.

Sophie was crated and had become sick enough to soil her crate, which is not something dogs will do unless under distress. Millie slept where she wanted, but in the middle of that night she came into our room and began barking at us.

“What is it, girl?” I asked, jolted awake. I followed her downstairs to find Sophie heaving. Blaine and I gave her a quick but thorough outdoor rinse with the garden hose, then went back to bed. Two hours later Millie woke us again.

Wash, rinse, repeat. It took a visit to the vet and several days for Sophie to get the ash sawdust out of her system, but she learned a hard lesson from that hard wood. One of our neighbors happened to own a furniture repair business, so he sanded the four turns in the chewed spindles smooth and re-stained them to match.

Just now, I rubbed my hand over the still remaining teeth-piercings on those chair spindles, thinking about Sophie as a strong, energetic puppy who never really liked retrieving tennis balls but would run figure eights around Millie. And barking. And spinning clock-wise. Those were her favorite pastimes. Shelties are herders, bred in the Shetland Islands to keep the sheep in check. Of our three shelties, Sophie had the strongest herding instinct, so she loved barking at anyone passing our home, coming to our door, and being welcomed inside. When our guests would leave, she told them goodbye with more barking and then added an extra farewell by spinning in circles.

When Millie died in early 2005 of lymphoma, Sophie changed. No longer ruled by our proud Millie, she seemed to gain confidence and actually became a much better dog. But she still barked and spun.

Sadly, for Sophie, our move to our new community and home three years ago put an end to her constant watch for walkers, especially those with dogs. She couldn’t see through the patch of trees in our front yard, so our home grew much quieter. Initially I didn’t miss her constant barking, but now I believe it may have aged her somewhat. There was nothing to keep her engaged, although she still barked when someone came to visit if she heard the doorbell. In the last several months we noticed her hearing had worsened, so her trips to the front door became less frequent. But she still spun when any company left until she grew weary and ill in the last couple of months.

Sophie’s fur, which shelties are well-known for, will probably blow around the house for several weeks, until the last remnants have been vacuumed away. When there is no more to stir, we will miss it. She had been unable to walk with us for quite a while now, after she began tripping on her arthritic ankles and limping for a few days afterward. I miss the days that she ran with me, while I was a runner. We will miss her pestering us for popcorn, even though we tired of telling her to get down. Last night she tripped while begging for her last popcorn treat, trying to remove her front paws from the front of the sofa to gobble the few kernels I had thrown for her. I will miss my floor being licked clean and being dirtied by wet paws. We will miss her sweet face, those bi-colored eyes peering into our souls, if they could do that.

I know God made dogs for man to domesticate, to call a friend. Our Sophie, our Clown Dog, you were our friend. And if you are with Millie now, don’t take any trash from her. Let her know that you knew us well, maybe even better since you out-lived her. But have fun. And get to know those two boys you never knew. They’ll like you better than they liked Millie, possibly. They’ll get a kick out of the spinning. And they’ll be great friends, just like you were.

(Sophie was born on April 28, 2002. She had congestive heart failure, severe arthritis, and possibly a non-treatable cancer, according to the veterinarian. She was euthanized on April 14, 2015.) 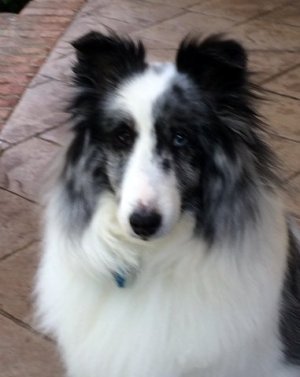 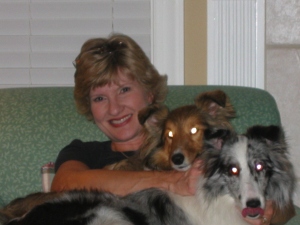 1 thought on “In Memory of Sophie, Our Clown Dog”