The Christmas holiday officially ended for us today when our older daughter and her husband headed back to New York City with their cat Mimi and dog Stella packed into their rental car with the suitcases, shopping bags, and sandwiches.

Nothing this year happened as expected.

This was the year we were going to celebrate with both sets of our recently-married daughters’ in-laws. There were parties to organize, gifts to buy and wrap, glasses to clink over witty toasts.

So often life does not go as planned.

I developed a wicked flu before the holidays and couldn’t shop for or host the Christmas dinner.

On Christmas Eve our daughter and son-in-law spent the entire day at the Emergency Veterinary Clinic with their cat who had gone into heart failure on the trip down.

On Christmas, while everyone gathered last minute at our younger daughter’s house a few towns away for a store-bought meal, I lay on our couch in our quiet living room with Stella–dozing, blowing my nose, and flinching from the throbbing in my throat each time I swallowed. 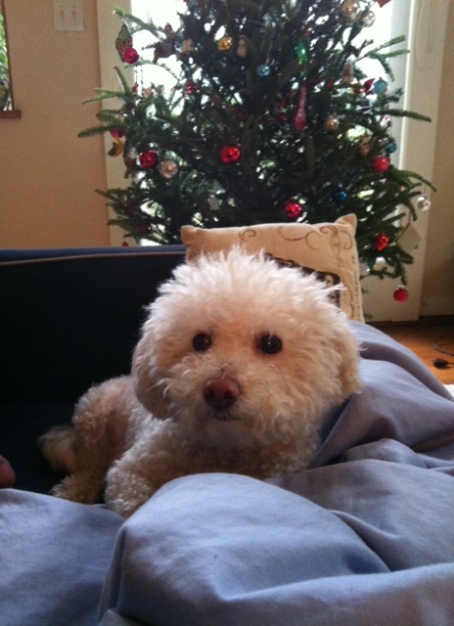 Even the tree seemed out of sorts this year. Half the lights refused to shine and of those that did light up, several were intermittent, ornery.

By New Year’s Eve I was feeling somewhat better but my New York daughter was getting sick. And my sister up in Rhode Island was suddenly bed-ridden with flu, unable to host her own daughter and son-in-law.

I thought of Christmas 30 years ago. Our son Malcolm had died in November and we couldn’t bear to spend the holidays in the house we had bought and lovingly fixed up before his birth in September.

We headed south to have Christmas with my parents. I took my niece and nephew to a production of the Nutcracker, the auditorium full of giggly children decked out in their finest bows and dresses and vests. My heart felt hard as iron.

All my well-laid plans seemed to mock me, kind of like this year only way worse. That long-ago season we were devastated, not just inconvenienced.

I think of all the people for whom this holiday season was abruptly ruined–the families of those who were murdered in Newtown, Connecticut; the people without homes and futures in the wake of Hurricane Sandy; the victims of tragedy and bad luck all over the world.

Sometimes I am amazed that we keep on making plans, that we continue to trust that the world will provide what we need and want.

So often it doesn’t.

After our daughter left today, I summoned the energy to take all the ornaments and the lights off the tree. I dragged the evergreen out to the curb for tomorrow’s pick up. Enough of this season already, I thought.

I wondered fleetingly about XMas 2013, relieved that it’s a whole year away. I lay on the couch, knowing that I will go back to work–that, as Scarlett O’Hara said, “Tomorrow is another day.”  I will feel better; life will return to normal. I will again hold workshops, meet deadlines, and organize get-togethers with friends and family.

I will count, again, on plans and hope and dumb luck, and I’ll buy some new strings of soft lights for next year’s Christmas tree.