Thursday is the best day. My daughter brings her son Lucien to my house for lunch, which we all enjoy together. She puts him down for a nap and then leaves for some much-needed alone time.

When Lucien, who turns two in April, wakes up, his greeting words are “Gogo (his name for me), back yard?”

Weather permitting, and sometimes when it’s not, we don our jackets and rubber boots and head to my fenced yard. Our first stop, the shed.  He “helps” me undo the lock on the gray wooden structure, open its double doors and there they are:  Tools. The toys of gardening.

Lucien’s small wheelbarrow, Gogo’s large blue one, perfect for transporting a toddler around the yard for a bumpity-bump survey of our works in progress. His plastic lawnmower, his trowels, Gogo’s big shovel. Gogo’s red rake, Lucien’s child-sized green one. Big green buckets, small orange ones. Clippers, the blue tarp we rake leaves onto and drag to a pile at the far end of the yard.

Way in the back, hidden by shrubs, stands the most revered object of all:  the compost bin.

Lucien loves emptying the small bucket of accumulated vegetable detritus from the kitchen into the compost bin—squeezed lemons, carrot peelings, onion skins, apple cores, egg shells and more. He stares at the swarming gnats and inhales the smelly rot, naming everything he sees—enjoying its varying states of decay. “Green lemon, brown celery.”

He looks into the bin for a long, long time. Finally, I coax him away.  He agrees that we can now add leaves and pine straw, covering his beloved mush. I tell him that this mix of dead vegetation will one day be beautiful soil.  I open the door at the bottom of the bin, another magical portal, to show him the rich loamy dirt. We dig some into a bucket to add to the holes we’ve dug for new plants.

We dig other holes too—for no reason but the love of digging. We haul buckets of dirt and rocks and gravel around the yard with no particular plan in mind. Lucien furiously rakes “moss out of monkey grass.”

Our hands get grimy, our boots heavy with mud and gravel. When we first started working out in the yard, he would look at his dirty hands and say, “Uh, oh.” And I said, “Wipe your hands on your pants.” So now that’s a ritual “Uh-oh,” he’ll say, looking up at me with a glint and sun in his eyes, “wipe them on Lucien’s pants.” (He refers to himself in the third person these days.) And we laugh. And Gogo wipes her hands on her pants.

Yes, these are the musings of a smitten grandmother. But I’m a grandmother whose only son died well before he reached Lucien’s age.

Out there with my little guy, as we haul and clip and toss rocks into buckets, I think back to those months, thirty-plus years ago, when my boy lay naked under lights, tubes in every orifice, a long angry slice down his chest, his faulty heart, after two surgeries, unfixable.

My heart gnashed and unfixable too.

Who knew then, in that sanitized glare of linoleum and beeping machinery, in all the pacing in the parents’ lounge, in the doctor’s kind gesture, taking my hand and saying, “We lost him,” that there could ever be other worlds, other children.

Who knew that the stench of a compost pile could offer up such blessings. 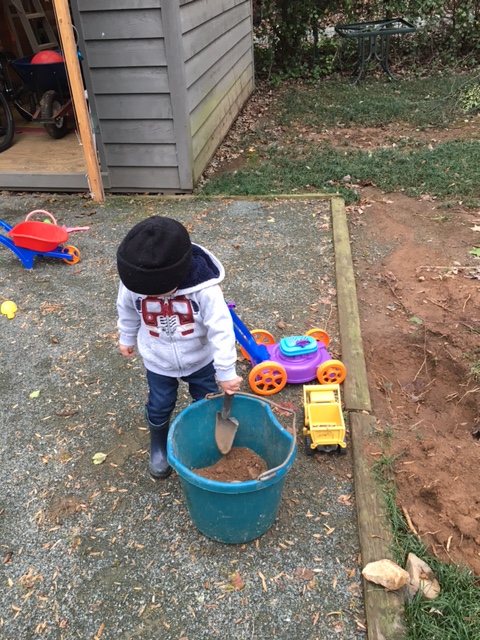 4 thoughts on “Back Yard Alchemy”